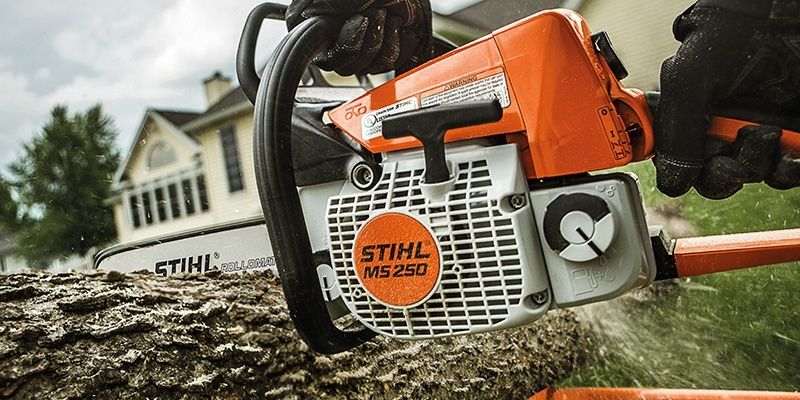 If you've ever bought, or thought about buying, a STIHL chainsaw, you've probably wondered what the letter and number abbreviations mean in the model names. It's a hot topic in many forums, and you'll find that it's very confusing. STIHL hasn't released much information about the meaning of these model numbers, but they do have this chart ranking them from occasional to extensive use.

You would think the smaller the number, the less powerful the chainsaw, and vice-versa. However, if you look closely, you'll see some 1XX models, like the MS 150 T-CE and the MS 193 T, near the extensive use end. Why are these ranked above some other models like the MS 271 or MS 391? That's what we're here to find out.

What does MS mean?

We'll start with an easy one. Every STIHL chainsaw model name starts with MS, MSA, or MSE. The common part, MS, stands for Motorsäge which is German for chainsaw. MSA indicates that it's a battery chainsaw and MSE tells us that it's an electric model. The first part is easy to figure out, but the numbers are where things get tricky.

What do the numbers mean?

Many people have made speculations about their meanings. Some suggest lower numbers are for homeowner saws and larger are for professional saws. Others say that the numbers align with the displacement of the saw, which seems to be the case some saws but doesn't hold up across the board. We've also heard that even and odd numbers or the generation of the saw somehow tie into it. There are a few more ideas out there, but none of them really stick. We're going to dig into the facts.

We found this Chain Saw Comparison Chart on STIHL's website and grouped them together by the first number. We noticed that the first number is a good indicator of engine power, displacement, and fuel capacity (besides MSA and MSE models).

Before 2000, STIHL chainsaw model numbers began with a 0. For example, STIHL carried 017 and 025 model chainsaws. This changed around 2000 when they added MS to the beginning and moved the 0 to the end. The 017 became MS 170, 025 became MS 250, and so on. We're assuming that it, combined with the first number, makes up a model number. These models may have different characteristics or designs that make them ideal for different use cases. This is why you'll see some 1XX and 2XX saws on both ends of the usage chart.

You may notice that the third number is always between 0 and 3. Looking at the MS 17X on the left side, you'll see that it has two gas versions, the MS 170 and MS 171. Let's compare them to get a better idea of what's going on.

The MS 171 has some bumped up specs and added features, but the build is pretty much the same as the MS 170. We noticed this trend across the board and found that the third number always started at 0 and went up from there. The MS 271 Farm Boss® page on STIHL's website says that it replaced the MS 270, indicating that the third number represents a version number for the model.

What do the rest of the letters mean?

By the rest of the letters, I'm referring to C-BE, T C-M, or other groups of letters at the end of the model name. These symbols indicate specific performance features included in the chainsaw. Here's a guide to those features so you can pick the best chainsaw that fits your needs.

This is pretty generic and could relate to multiple features. It might imply that it has an impressive power-to-weight ratio or a feature that makes it easier to use than another similar model. For example, the MS 261 C-M features M-Tronic™ technology, redesigned cylinders, and a slimmer, more ergonomic housing.

As the name suggests, STIHL Easy2Start™ makes starting easier and require less effort. An added spring between the crankshaft and start rope rotor allows users to pull slower and with less force.

M-Tronic™ is an engine management system that monitors and compensates for changes in work conditions. The onboard microprocessor picks up changes in temperature, octane levels, elevation, fuel quality, and air filters and maximizes performance without the user having to make adjustments manually.

The QuickStop® chain braking feature reduces the risk of injury in some kickback situations. If the operator's hand releases from the handle and activates it, the chain will stop within one second.

The wrap handle wraps around the saw, making it easier to handle in multiple positions for felling or cutting limbs.

If you compare the MS 211 to the MS 211 C-BE, you'll find that most of the specs are the same, but the MS 211 C-BE has those added features. If you're looking for value, you're probably going to be picking the MS 211. If you want the features that the MS 211 C-BE provides, you'll be paying a little extra for them.

It's not easy comparing and shopping for STIHL chainsaws just based on the model names, but hopefully, this will provide some guidance. We recommend using the chart as a starting point and digging into more specific product details from there. If you need help finding the right STIHL chainsaw to fit your needs, reach out to your local Hutson store and our parts department will be glad to help!